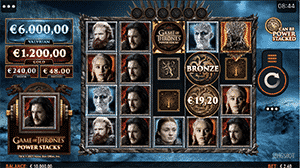 The Isle of Man casino game studio Microgaming have over the past few weeks been having something of a renaissance.

What with the successful reboot of their Thunderstruck slot, in the form of Thunderstruck Wild Lightning being released at the end of July.

Now the month of August sees Microgaming return to Westeros with the release of Game of Thrones Power Stacks. Not to forget that during the last week of the month, sees another sequel to their popular Break da Bank slot series.

Released globally across all operators which carry Microgaming game content including the likes of 32Red, Game of Thrones Power Stacks, is a highly volatile slot playing over 40 lines, which incorporates the popular Link & Win feature.

All the main characters from the HBO Game of Thrones series take part, with the likes of the Mother of Dragons herself appearing on the 5 reels in play.

Players have the chance to win up to £500,000 and the free spin bonus round is attained by hitting three or more scatters.

With a reported RTP of 96.20% and bet amounts from as little as 0.20 a spin up to £20 a spin, Game of Thrones Power Stacks  is likely to rival Thunderstruck Wild Lightning as one of the most popular slot game releases of 2021.

Andrew Booth, Director of Games at Microgaming, said: “We’re thrilled to add another Game of Thrones™ slot to our legendary offering with the inclusion of the new Power Stacks™.”

“Combine that with the Link&Win™ feature and atmospheric sounds, players are sure to pledge their allegiance to House Stark, House Targaryen, House Lannister or House Greyjoy.”

Richard Vermaak, Head of Studio at Slingshot Studios, added: “As a fan of this iconic brand, I’m very excited for players to experience Game of Thrones™ Power Stacks™.”

“I hope this slot fills a hole for those missing each nail-biting episode to see what happens to their favourite characters, with Drogon making an appearance when a big win occurs!”

The studio Slingshot Studios who are responsible for bringing the latest Game of Thrones slot game to life, were established five years ago in 2016 and their team who create games exclusively for Microgaming, are made up of gambling industry veterans.

Other games produced by Slingshot Studios include African Legends and Banana Odyssey.

For further information as to what Microgaming have in store for players as summer comes to an end, check out Microgaming’s August game release schedule which is published on our sister site Casinomeister.